To show a simple usage of push notifications I developed 2 test examples.
I really want to thank FPComplete for giving me the possibility of hosting the Yesod app.
The tests are available online on [1] and the code is available on GitHub [3].

* BackAndForth Messaging:
In this example, I show how to use the push-general library to handle the registration/reception and sending of messages. From a Yesod app, you can send notifications to devices registered and receive messages from them.
When the server needs to send a message, uses the general api for sending a notification and handling the result in order to correctly actualize the DB. This means removing the devices that have been unregistered and changing the regId of the devices that have changed.
To try this example:
+ On an Android device, you follow these steps: [2].
+ On a WindowsPhone device, you can download the app from Microsoft Store: [4]
+ Once you registered on Server, you can start sending/receiving notifications through the website: [1]. * Connect 4:
I have been thinking of an app which lets me show how useful push notifications are. The advantage of this notifications is that you can receive information from server when it is available without needing to continually poll. So, I started to think about a multiplayers game. Every time a player does something, you let the rest know about the new movement. So, I ran into the board game: "Connect 4".
Both, authenticated web players and users of the android app, can play one against each other.
For actualizing the website, I use long polling, while for the Android app, push notifications.

To try the example:
+ On an Android device, you follow these steps: [2].
+ Once you registered on Server, you can start playing against web or Android users. [1] 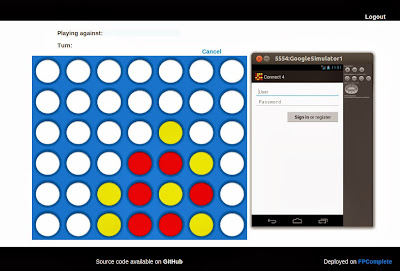 Every feedback is welcome!

3 Libraries for communicating with Mobile devices through Push Notifications.

I announce the result of 3 months working on the GSoC project: "Communicating with mobile devices". After reading many documentation, thinking about a good abstraction, learning about mobile apps and networks connections, and really valuable recommendations from my mentor, (I really want to thank Michael Snoyman for his availability and kindness) I finished developing 3 libraries to make it easy to send push notifications to mobile devices. They are available on Hackage:

* push-notify-0.1.0.0 : This library offers a simple API for sending notifications through APNS, GCM and MPNS. [1]

* push-notify-general-0.1.0.0 : This library offers a general API for sending/receiving notifications, and handling the registration of devices on the server. It provides a general abstraction which can be used to communicate through different services as APNS, GCM, MPNS, hiding as much as possible, the differences between them. [3]

Now, it is easy to send/receive information with mobile devices, so you can easily develop server applications which interact with them.
So, to clarify this, as part of this project, I developed many test examples, including Android/WPhone and Yesod apps. The code is available on GitHub: [4] and they are running online on: [5] , so can be downloaded and tested on mobile devices. (BackAndForth Messaging and Connect4 apps)
Every feedback is welcome!

The purpose of this library

This library defines a general API for communicating with iOS, Android and WPhone powered devices, sending/receiving Push Notifications. It is available on Hackage: link
The main idea is to hide as much as possible the differences between the different services.
Push Notification services in general, are very similar. They all are asynchronous, best-effort services that offer third-party developers a channel to send data to apps from a cloud service in a power-efficient manner. The main differences between them, refer to details as: the maxim payload length, the quality of service, queueing the messages or not, and the time limit for this, the way the messages are handled on devices, etc.
The registration of devices is very similar too. The device/app gets a unique ID provided by the different services, and sends this identifier to your 3rd party server. So then, when you want to send messages to these devices, you have to send them to the Push Servers, and they will deliver the messages to the proper devices.
So, Device will be our general identifier.

How to use this library

All the communication with devices will be abstracted behind the PushManager data type.
You will reference to it when intending to send notifications. Also, if you properly set the callback functions, you will be able to receive messages from devices.
So, the mains steps:
When your Apps on devices need to send an upstream message they have 2 options:
You can see many test examples on the GitHub repository: https://github.com/MarcosPividori/GSoC-Communicating-with-mobile-devices

Everytime a device sends a message to our system as HTTP POST request it should provide the pair {"regId" : identifier , "system" : system } specifing the ID and the system running on the device, so we can build the Device identifier.
Now we support APNS, MPNS and GCM. So the possible combinations are:
{ "regId" : RegId , "system" : "ANDROID" }
{ "regId" : DeviceURI , "system" : "WPHONE" }
{ "regId" : DeviceToken , "system" : "IOS" } (token stored in hexadecimal representation)
This PushManager Yesod subsite consists of 2 routes for receiving JSON data:
Posted by Marcos at 15:45 2 comments:

The GCM Cloud Connection Server (CCS) is a connection server based on XMPP, offering a new option to the old HTTP request mechanism to send messages to GCM servers. CCS allows 3rd-party app servers to communicate with Android devices by establishing a persistent TCP connection with Google servers using the XMPP protocol. This communication is asynchronous and bidirectional.
CCS offers some important benefits:
- The asynchronous nature of XMPP allows you to send more messages with fewer resources.
- Communication is bidirectional, not only can the server send messages to the device, but the device can send messages back to the server.
- You can send messages back using the same connection used for receiving, thereby improving battery life.

The format of CCS messages continue with the same general structure than with the GCM HTTP request mecanism.

Api for communicating through CCS:

I developed an API for communicating through CCS ([1]). For this, I designed a way of building the messages, sending them and handling the result.
For efficiently sending/receiving messages without blocking a connection, I decided to communicate with CCS server through a worker thread which maintains a XMPP connection and handles the ack/nack protocol of messages. So you have to start this worker thread before sending notifications, and then communicate with it through a channel. Also, it is possible to define a callback function to be called each time a message arrives from devices.
For dealing with XMPP connections, I opted to use the Pontarius XMPP library, which has a very friendly interface. I want to specially thank to Pontarius mantainers for their quick response to my issues using this library.
So, the API looks like this:


The main idea is: -  First of all, the sevice is started with: 'startCCS'.

This function:
*  Creates a channel to put the notifications to be sent.
*  Starts a worker thread, which maintains a XMPP connection with CCS servers, sends the data it receives through the cannel, handle the ack/nack protocol of messages and everytime it receives a message from devices, it will call the callback function.
*  Returns a CCSManager.

- Then, I can use 'sendCCS' to send messages.

- I stop the service with 'closeCCS'. It kills the worker thread.

The worker identifies each message it sends with a number, which is sent to CCS. This number is returned in nack/ack messages by the CCS servers, so it can know if it was successfully sent and returns a proper result.
The code is available on GitHub:
- The CCS Api : [1]
- Test example for CCS: [2]
- Android App for CCS: [3]

For more information about:
- The CCS Service: [4]

API for communicating through MPNS

I developed an API for communicating through MPNS with Windows Phone mobile devices ([1]). For this, I designed a way of building the messages, sending them and handling the result.
To communicate with MPNS servers, I need to send POST requests, so I decided to use Conduit, as I have done with GCM. The MPNS Api looks like this:

MPNS let you send notification in an authenticated or unauthenticated mode, so you can configure this with  MPNSAppConfig:
To build messages, I developed a data type "MPNSmessage"

Last, for handling the result:

For more information about:
- The MPNS Service: [3]
- The communication with MPNS servers:  [4]
Posted by Marcos at 06:32 No comments:

The Microsoft Push Notification Service in Windows Phone is an asynchronous, best-effort service that offers third-party developers a channel to send data to a Windows Phone app from a cloud service in a power-efficient manner.

API for communicating through APNS

I developed an API for communicating through APNS with iOS mobile devices ([1]).
For this, I designed a way of building the messages, sending them and handling the result.
One important thing that I had to take into account, was how to maintain the connection. For APNS, I needed to communicate through a streaming SSL connection, so I couldn't use conduit as I 've done with GCM. So, to face this problem, I developed an APNSManager.
The API looks like this:


The main idea is:

- First of all, the sevice is started with: 'startAPNS'.
This function:
* Creates a channel to put the notifications to be sent.
* Starts a worker thread, which maintains the connection with APNS servers, and sends the data it receives through the cannel.
* Returns an APNSManager.

- Then, I can use 'sendAPNS' to send messages. Every time I call it:
* It puts the message on the channel.
* Wait until the time the message is taken by the worker thread.
* When the message is taken from the channel, the worker thread will send me a duplicate copy of the error channel. So, I will wait for the end of the sending, or an error msg through the error channel.
* I return the appropiate result depending on a successful or not operation.

- I stop the service with 'closeAPNS'. It kills the worker thread.

The worker identifies each message it sends with a number, which is sent to APNS. If an error ocurred, this number is returned in an error messages by the APNS servers, representing the number of the last message that was successfully sent.
Then, the worker continually sends messages until it receives an error message. In this case, it resends the error message to the error channel for all the threads waiting for a response, and then it restarts itself, because after an error, APNS servers close the connection.
The time we wait for an error response, after having sent all the messages, can be stablished with the timeoutLimit parameter, when creating a Manager.

As to use this service, Apple requires you to be an enrolled iOS Developer or something similar, I decided to test the API with a local server. This server was taken from: [3] . It simulates the APNS servers and I modified it to test different common scenes.

For more information about:
- The APNS Service: [4]
- The communication between providers and APNS servers:  [5]

The aim of this blog is to provide information about the development of the project: "Communicating with mobile devices" as part of the Google Summer of Code 2013. This project belong to the organization: Haskell.org, and is being developed by the student Marcos Pividori under the supervision of Michael Snoyman as project mentor.